Marine Commandant Gen. Berger has all but stated that the Marines are out of the large scale amphibious assault business.  However, he has also stated that he sees a future where the Marines will conduct small unit amphibious landings.  Note the use of the term ‘landing’ rather than ‘assault’.  An assault is, by definition, an opposed landing and requires a huge amount of support in the form of ships, aircraft, mine clearance, bombardment, and so on.  A landing, as Berger uses the term, refers to a clandestine penetration of a small amphibious ship to a remote location and the disembarkation of troops and supplies in an unopposed landing.


Setting aside the utterly ridiculous aspects of the Commandant’s vision (see, "Hidden Bases"), let’s focus instead on the amphibious ships (now called Light Amphibious Warship – LAW) that he envisions and has ordered the Navy to procure.  Breaking Defense website gives us the first glimpse at what these ships might look like.(1)


In briefing slides presented to the defense industry last month, the Navy said it plans to begin buying the 200- 400 ft. Light Amphibious Warships  ships in 2023, and it is looking for mature commercial designs that can carry a crew of 30 and travel 3,500 nautical miles. (1) 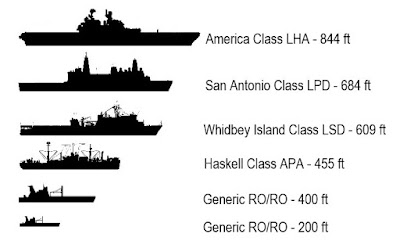 Wow!  I thought that amphibious ship sounded small but when you actually see it next to other amphibious ships you instantly realize that we’re talking really small !  At this point you begin to see just how small Commandant Berger’s dispersed units will have to be.  We’re talking not much more than platoon size and with very little accompanying equipment.  Go ahead, take another look at the graphic and really soak in the size differential between real amphibious ships and Berger’s ships.


The Drive website provides a few more specs on what is now being called the Light Amphibious Warship (LAW).(2)  Note that these values are minimum rather than maximum values but, realistically, they’re not going to increase much.
Unloading will, apparently, be by ramp, over the beach, as opposed to landing craft.

All right, let’s consider some of the aspects of this ship and concept that haven’t really been discussed by the Marines or in the press, to date.

Stealth.  In order to have any chance of penetrating into enemy territory and surviving, the ship needs to be stealthy to the maximum extent possible.  This is completely at odds with the Navy’s desire to acquire an existing design since none are sufficiently stealthy.  This concept requires stealth on the order of the Swedish Visby.  How that’s accomplished while still mounting many large cranes, ramps, and deck cargo handling equipment is a mystery.

Speed.  One of the keys to Berger’s concept is the ability to penetrate enemy territory very quickly.  Let’s face it, every minute spent near or in enemy territory is more chance to be spotted.  This dictates speed, speed, and more speed.  Again, this is the antithesis of traditional amphibious ship design and utterly at odds with the 14 kt transit speed specification.  Apparently, the enemy is going to be blind to this vessel so that it can make leisurely 14 kt cruises in and out of enemy controlled waters.  This represents and absolutely amazing  degree of self-delusion about the enemy’s complicity in their own destruction.

Range.  This should be an obvious requirement.  If we’re talking about penetrating into enemy controlled waters we need great endurance and range.  For example, the distance from Guam to the Spratly Islands in the South China Sea is around 2300 miles or 4600 miles for the round trip.  Considering that the concept is for the small, secret sea control units to be able to quickly relocate, at a moment’s notice, it is obvious that the LAW has to remain with the land unit which requires extended endurance and range.

Obliviousness.  In order for this concept to succeed, the LAW has to remain with the land unit so that it can assist with instant relocations, as we just discussed.  This assumes that the enemy has zero ability to spot a non-stealthy amphibious vessel hanging around islands in enemy controlled territory.  The degree of obliviousness that the enemy must demonstrate for this concept to work is breathtaking.

Self-Defense.  An amphibious vessel sailing on a 14 kt leisure cruise through enemy waters just might have to defend itself (repeatedly) during the course of its cruise.  For example, the leisure cruise from Guam to the Spratly Islands will require 6 days during which it will be subject to detection and attack.  Unless we provide substantial Aegis (Burke) escorts, the likelihood of surviving the trip is nil.  Of course, this creates a vicious circle of logic.  The more escorts, the more likely the group is to be spotted but the fewer the escorts, the less likely the vessel is to survive the slow motion transit.


Since there has been no mention of escorts in this concept, as yet, we’ll assume that the vessel will be self-escorting which suggests a need for substantial self-defense such as ESSM, RAM/SeaRAM, and CIWS.


Even a cursory examination of this concept reveals that it has not been well thought out.  Well, actually, it hasn’t been thought out at all.  As I’ve repeatedly pointed out, the degree of cooperation by the enemy required to make this concept work is staggering and possible only in a world of total fantasy.


Commandant Berger would have us believe that a small, undefended, painfully slow, non-stealthy vessel is going to be able to penetrate deep into enemy waters to land very small units that will exert total maritime dominance for hundreds of miles around – all while totally undetected.  This is not a concept anchored in reality.  I don’t know what wargames the Commandant has been playing that lead him to believe this concept can work but it’s clear that Dungeons and Dragons has a firmer basis in reality than whatever games the Commandant has been playing.

Posted by ComNavOps at 4:17 AM

Comments will be moderated for posts older than 30 days in order to reduce spam.