Lockheed Martin recently displayed their US Navy frigate concept at the DSEI trade show in the form of a concept model (1).

That’s a little light for a ship that’s 80% the length of a Burke.  In comparison, the original Perry class frigates had a single arm missile launcher with a magazine of 40 missiles which could include a mix of Standard and Harpoon.  This LCS frigate, with 16 VLS cells is limited to 16 Standard missiles (assuming the VLS length is adequate as suggested by the article), up to 64 quad-packed ESSM, Tomahawks, VL-ASROC, or a mix thereof. 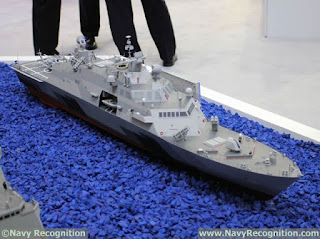 While 64 quad-packed ESSM is quite useful for a frigate size ship that would preclude more capable Standard missiles.  Having anything less than 16 Standards would be just about pointless which probably limits the frigate to the 64 ESSM.  Of course, if any cells are to be used for Tomahawk or, more likely, VL-ASROC, that would cut deeply into the ESSM loadout.  For example, if the ship carried 8 VL-ASROC, as would seem reasonable for an ASW focused frigate, that would only leave 8 cells for a maximum of 32 ESSM.  As I said, for any reasonable and likely mix of missiles, the loadout is a bit light for a ship that’s 80% the size of a Burke. 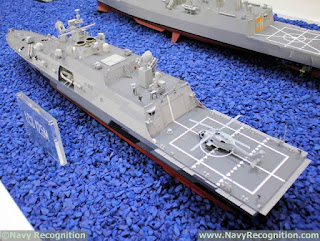 The crew size of 130 is a recognition by the Navy that its LCS minimal manning and deferred (pier side) maintenance concept is a failure.  It is also quite likely that 130 crew would turn out to be too small. 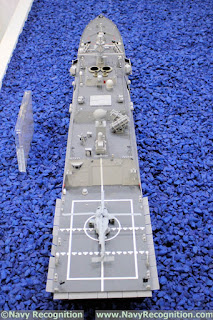 The final noteworthy aspect of this is that unless the fundamental structure of the ship is changed, an LCS frigate retains all the inherent weaknesses of the base LCS.  These include stability problems and inadequate stability margins, non-existent weight margins, structural weaknesses, use of aluminum for a ship that is now expected to stand and fight, loud waterjets (a concern in ASW), apparent lack of a hull mounted sonar (due to excessive self-noise in the base LCS), inadequate range/endurance, etc.  To be fair, what was presented was just a simple concept model but it’s hard to believe that all the inherent flaws that make the base LCS such a poor warship can be rectified in a somewhat enlarged frigate version.

Honestly, this is just warmed over LCS crap and compares quite poorly to the many outstanding frigate designs around the world.  I hope the Navy has the sense to walk away from this.  Sadly, given the Navy's history of horrible decisions, I think it's quite likely that you're looking at the winner of the frigate competition.