The Marine Corps Is Now Redundant

Marine Corps Times website is now confirming that the Marines are planning to significantly dial back their combat capability (1) to the point that they will only be able to function in very low end threat scenarios or in only peripheral capacities in higher threat scenarios.  Here’s the details, as summarized in a graphic posted at SNAFU website (2) : 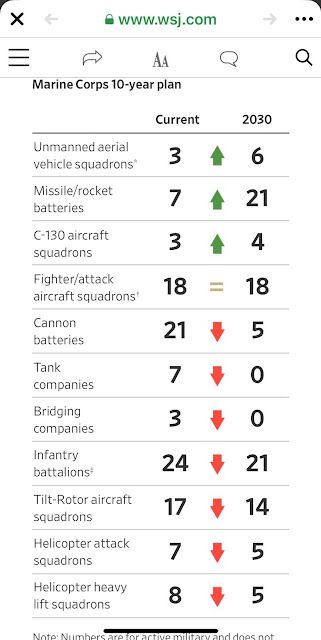 As shown in the graphic, the Marines are significantly cutting back on firepower – you know, the stuff that lets you win in combat.
That is some serious insanity being demonstrated there!


The only aspect of the Corps that is being increased – and it’s a huge increase – is land based anti-ship missiles.  Clearly, the Commandant views the Marine’s main mission, now, as sea control which, as we’ve discussed, is an idiotic concept that is simply not viable.  Even the F-35/aviation side of the Corps is going to take a substantial hit.  Previous Commandants sacrificed the ground element to promote the aviation side and now it appears that, too, is fading, all so that the Commandant can attempt to take over a Navy mission in a bid to remain budget-relevant in the face of the China threat.  The irony is that the sea control mission will actually make the Marines irrelevant.


The only other missions the Marines are now capable of are very low end, very light infantry work.


The Marines are no longer a viable warfighting force.  They are a peacetime police force.  This Commandant has, in the stroke of a pen, relegated the Marines to irrelevance.  There is nothing that the new Marine Corps will be capable of that can’t be executed better and faster by the Army.


This Commandant has done what our enemies could not: eliminate the Marine Corps as an effective fighting force.  It breaks my heart to say this but this is the final nail in the coffin - the Marine Corps is now redundant and should be disbanded.