The misunderstanding that leads to these erroneous conclusions lies in how naval combat is waged.  Too many people seem to think that peacetime ship deployments will continue more or less unchanged during war.  Nothing could be further from the truth!  Ships will not deploy at all.  Every available ship will fight “continuously” for the duration of the war.  There will be no routine, scheduled, rotational deployments in and out of the war.

The history of naval combat is one of very brief missions and battles followed immediately by return to port for repair and replenishment.  Combat, both naval and land, is not continuous.  It ebbs and flows.  Forces gather, conduct recon, maneuver, commit to a battle, and then settle back into a “stagnant” period while they re-strategize, reorganize, repair, reassemble, replenish, and rest.  Eventually the cycle repeats itself.  This cycle is even more evident at sea than on land.

As an example, let’s take a closer look at how one ship, the USS Enterprise (CV-6), operated during the first, frantic year of WWII.  Below is a calendar of 1942 with the days blocked in red (at sea) or green (in port, mostly ).

During the year, participated in strikes and battles at , Wake, , the Doolittle raid, Midway, , Eastern Solomons, and .  A very busy year, indeed, and yet note the amount of time in port - roughly equal to the time at sea.  Also, note that the longest sea periods were only around 7-8 weeks as opposed to today's peacetime deployments of several months or more!  So, in the middle of the first desperate year of the war, the Enterprise still did not put to sea and stay there for extended periods.

As seen from the calendar,  did not deploy for months on end, as so many people seem to believe a ship would, and then rotate back to the .  Instead, as with every other ship in the fleet, she put to sea for a few weeks at a time, executed a mission (strike or battle), and returned to port to repair, refit, and replenish.   continued this pattern for the duration of the war. 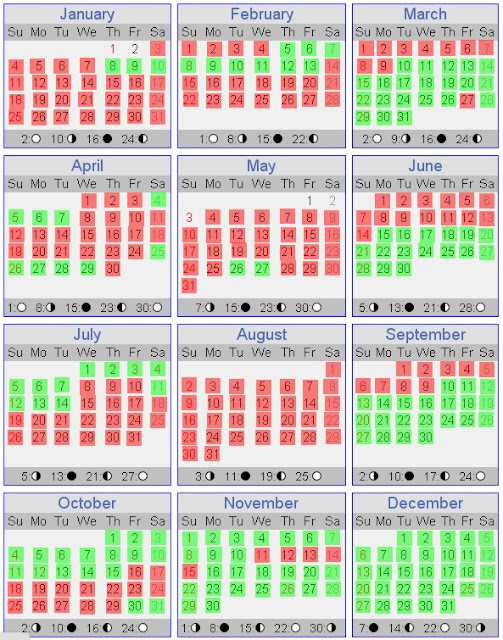 Note:  Lacking complete ship's logs, a few sea/port days had to be guesstimated but 95%+ of the days are confirmed via data from various sources.

I apologize for the fuzziness of the image but the Blogger engine has only very limited graphics capabilities.

The widely held belief that ships will deploy during wartime is incorrect.  Every ship in the fleet will fight continuously in a pattern of brief missions and battles followed by returns to port.  The pattern is generally one battle followed by an immediate return to port.

So, what are the implications of this pattern of naval warfare?

This post clearly demonstrates that wartime operations bear little or no similarity to peacetime operations.  Naval analysts need to keep this distinction firmly in mind while considering combat operations, fleet size and structure, and forward basing needs.  Of course, this also begs the question, why are we conducting peacetime deployments that won't be the mode of operation in a war (train like you fight, fight like you train) instead of conducting peacetime missions?

Hopefully, we now all have a better understanding of how naval warfare is conducted.
Posted by ComNavOps at 4:00 AM