Naval warship stealth is one of the most difficult things to find any data on.  The best information in the public domain consists of nothing more than vague statements like, “smaller radar cross section than a fishing boat”.

One of the few vessels that claims to be stealthy and has even a bit of descriptive information is the Saab/Kockums Visby class corvette.

The class corvette is claimed to be the first vessel in the world to have fully developed stealth technology.

“Flat surfaces and concealed equipment reduce radar signature to a minimum. The hull is designed on stealth principles with large flat angled surfaces. Every feature that need not necessarily be located outside the hull has been built in or concealed under specially designed hatches.” (1)

The concealed nature of much of the ship’s equipment is a noteworthy aspect.  It has been used on other ships but seldom to the degree that the does.

Naval Technology website quantifies the radar detection range of the .

Saab suggests that the vessels small radar cross section (RCS) is due, in part, to the material of construction.

The carbon fiber material has the added benefit that it conducts electricity and functions to shield radio signals from the ship. (3)

It remains to be seen how the material behaves in combat damage situations.  Does it fracture, does it produce toxic fumes when burned, does it propagate fire, can it be repaired at sea, etc.?

Other, seemingly minor, aspects of the ship’s radar signature have been minimized.

“Many less noticeable aspects include the coating of the bridge windows with indium tin oxide and gold which prevents radar returns from objects inside. Hatches and vents are also adapted with things such as a honey comb grid which also prevents returns, while radar absorbent materials have also been added in selected areas. The antennas are retractable into the hull as are the floodlight and fog horn, and even the navigation lights have been adapted to not stand out. They are fitted with quadruple redundant LED lights to avoid giving off a heat signature which brings us to the next point.” (3)

“The paint of the ship’s hull has also been specifically developed to reduce the IR signature.” (3)

Radar cross section is not the only stealthy aspect of the ship’s design.  The turbine exhausts have been relocated from the traditional upper superstructure location to the stern and use water injection to lower the exit temperature.

“The gas turbine exhausts have been concealed in hidden outlets close to the water surface at the stern of the vessel.” (1)

One can’t help but wonder if the location of the exhausts to the stern is a wise idea.  If a missile does manage to home in on the exhaust, it will hit the stern and cause almost certain loss of propulsion and probably fatal flooding.  On the other hand, if the location combined with the water injection are sufficiently effective then a major heat source has been nearly eliminated.  Unfortunately, I have been unable to find any actual data regarding the thermal reduction effectiveness.

“…  the ship has been fitted with an extensive degaussing equipment which renders it without a magnetic signature detectable by a mine. This is achieved by fitting degaussing coils throughout the ship which compensates for the magnetic signature of the on-board equipment. These are laid out in an X, Y and Z grid – the equipment also measures the earth’s magnetic field and compensates for this by adjusting the power to the degaussing system. The larger coils can however only manage the ship as a whole. There are specific steel objects that needs separate degaussing setups fitted. Engines, generators and gearboxes among other things.” (3)

The salient point to all of this discussion is the attention paid to every aspect of the ship’s stealth and the degree to which stealth was pursued.  The American Burke or LCS classes, by comparison, have only rudimentary stealth measures applied, mainly in the form of structural shaping (sloped sides).

Saab presents a fascinating series of photos related to warship stealth which illustrate their claims about ship stealth.

Here is a photo of a U.S. F-117 stealth fighter.  Note the flat, angular panels and lack of protuberances. 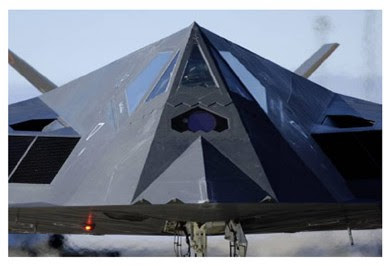 Now, here's a photo of the Visby.  Again, note the flat, angular panels and lack of protuberances.  The similarity to the F-117 is striking. 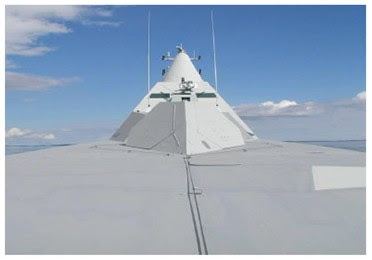 Finally, here is a photo of a U.S. LCS (Freedom class).  The Navy claims that the ship is stealthy but note the many protuberances, round domes, bits of deck equipment, exposed electrical junction boxes, antennae, etc. 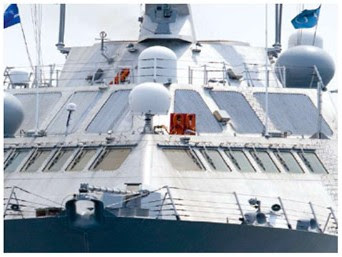 Compare the number of projecting bits of equipment in the bow-on photo of the LCS versus the bow shot of the .  It’s clear which one was serious about signature reduction!

Now, the key question is whether the extreme stealth measures of the are worth it.  For example, if the Burke and LCS can’t be detected until the searching platform is within visual range then any further signature reduction – ala the – serves no practical purpose.  Common sense would suggest that the ’s extra stealth measures are worthwhile but without data there is just no way to know.

The related question is what impact the ’s stealth measures have on the various ship’s system performances.  If the price of some extra stealth is poorer sensor performance, reduced weapon effectiveness, greater difficulty shiphandling, more mechanical problems associated with hidden doors and such, less efficient propulsion performance, etc. then these negative impacts would have to be weighed against the benefits of some incremental improvement in stealth.  Again, without data we just can’t make any judgments.

Regardless, it’s fascinating to see what a maximum, operational, stealth ship looks like and how it’s designed.