USNI News website has a lengthy article about carrier deployments and maintenance.(1)  It makes for sobering reading and I urge you to read it.  I want to analyze the implications but, first, it is necessary to understand the fundamental conditions so here are some of the main points from the article (this does not relieve you of the responsibility of reading the entire article for yourself!):

The current status of our carriers illustrates the problems.  Right now, two carriers are tied up with mid-life refueling and complex overhaul (RCOH) activities instead of the normal one carrier at a time: USS George Washington (CVN-73) is in the second half of its four-year overhaul, and USS John C. Stennis (CVN-74) is in pre-RCOH activities and should begin its overhaul late next year.

A third, the Ford, is still trying to achieve operational status and is years away from doing so.  The first deployment is likely 2024 and that assumes that all goes well, including shock tests.

The carrier status is summarized in the table below.

Deployments, and double deployments, are eating up our carrier lifespans, ruining their material condition, and reducing readiness.  Why are we doing this to ourselves?  Deployments are intended as a deterrent but they do not accomplish anything.  I know that’s trying to prove a negative but we do have evidence.  If carriers are what’s preventing Iran, Russia, NKorea, and China from initiating hostilities with us or our allies then hostilities should have occurred during any of the extended periods of carrier coverage gaps that have occurred over the last decade or so in the various regions.  The fact that they haven’t demonstrates that the presence of a carrier has no deterrent effect and the absence of a carrier has no detrimental effect.  In other words, carrier deployments serve no purpose.

It is important to understand the devastating effects of double deployments and deferred maintenance.  Let’s look at one example:  storage tanks.  Carriers have enormous numbers of tanks that store all manner of fluids.  Those tanks corrode and need regular maintenance.  If the maintenance is performed on a regular basis, the tanks never get too bad and the work is fairly straightforward, easy, and quick.  However, if the regular maintenance is deferred then the tanks are much more corroded by the time maintenance is performed and what should have been a fairly straightforward, easy, and quick effort becomes much more difficult and time consuming.  An analogy would be if you take care of little spots of rust on your car as they appear, it’s no big deal but if you wait until the car is covered in rust and the corrosion has eaten through some panels then the repair is a major effort and cost.

This is exactly what’s happening with the carriers.  The planned maintenance work is being hugely increased as the extent of the deterioration is revealed when the equipment is actually opened up and examined.  Maintenance time is being doubled from what was planned.

We are generating crippling maintenance requirements faster than we can perform the required maintenance.  Every deployment increases the carrier maintenance backlog and makes the situation worse.  We need to step back, take a pause in carrier operations, focus on maintenance, and then return to operations with a sane concept of use instead of the blind attempt to fulfill the Combatant Commander’s ego-driven requests for carriers. 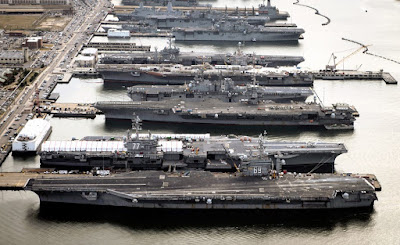 We need to say no to the Combatant Commanders.  I know that some of you are going to say that the Navy has to obey orders and can’t just arbitrarily say no.  Well, that’s incorrect.  The National Defense Strategy in January 2018 called on the military to prioritize building up readiness and lethality for a future fight over routine low-end operations today.  There’s the permission to say no.  Combatant Commanders do not ‘outrank’ the National Defense Strategy.  The Navy has, essentially, been given an order to prioritize readiness over routine operations.  Instead, we are doing the opposite of that.

There you have it … Deployments (generated by the Combatant Commander’s pointless requests for carriers) are degrading our carrier readiness to an alarming state and the situation is getting worse with each deployment and double deployment.  Carrier usage is increasing while maintenance is decreasing.  This is insanity and must stop.  The National Defense Strategy gives the Navy the ‘cover’ they need to say no to the endless and pointless requests for carriers from the Combatant Commanders.  Now we just need a Chief of Naval Operations with the courage to actually say no.  Unfortunately, CNO Gilday has demonstrated that he is not that man.

By the way, we only have 9 air wings.

By the way, the same problems are happening with all ships, not just carriers and the problems are only going to get worse.  If we can’t maintain 280 ships how are we going to maintain 350-500 ships?

Posted by ComNavOps at 1:00 AM