For no particular reason, ComNavOps has always had a fondness for the Virginia class nuclear powered cruisers, believing them to be one of the most attractive looking ships of the modern era.  For nostalgia sake, let’s take a closer look at them.  The class consisted of four ships, as shown below.  Note the very short service lives.  The class was the victim of the Cold War ‘peace dividend’ as their mid-life refueling was considered too costly for the time period given the collapse of the Soviet Union.


The ships were 586 ft long (about 20 ft longer than the Ticonderoga class cruisers) with 11,666 tons full displacement and a crew of 579.  Wiki reports the construction cost as $675M (1990) which is $1.3B (2020) today.  Interestingly, these ships were initially classified as frigates/destroyer leaders before ultimately being labeled cruisers.


The class underwent refits in the 1980’s which resulted in the elimination of the helo and hangar in favor of Tomahawk armored box launchers.  Other additions included CIWS and Harpoon launchers.


The post-refit weapons fit was respectable for the time: 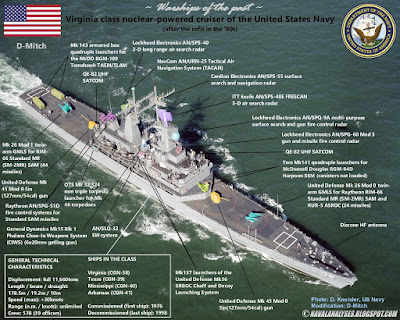 Let’s take a closer look at some aspects of the class.

Mk26 Launcher.  The Virginias had 2x rapid fire Mk 26 twin arm missile launchers mounted fore and aft.  A pair of missiles (one on each arm) could be launched every 9 seconds.  Thus, the ship’s overall firing rate was 4 missiles every 9 seconds – a respectable rate and quite adequate for almost any scenario.  Given the Navy’s typical shoot-shoot-look engagement sequence, this rate of fire seems perfectly adequate.  Today’s VLS really offers little in the way of an effective enhanced firing rate.  What VLS offers is that every missile is available for use as opposed to having to be selected and loaded.


It’s an article of faith, today, that VLS systems are vastly superior to twin armed launchers but the reality is that they’re not.  They have a few advantages but they also have drawbacks. 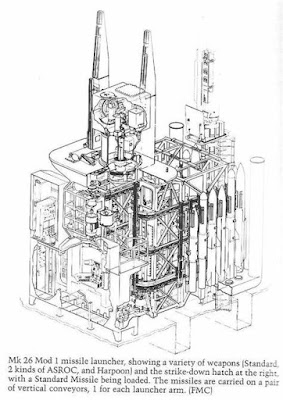 ASW.  The ships carried bow mounted SQS-53A sonars and, as originally constructed, a below deck hangar and elevator for one Kaman SH-2 Seasprite LAMPS helicopter.  The hangar proved problematic and the Navy was never able to achieve a watertight fit of the horizontal hatch covers.  The helo and hangar were eliminated in the 1980’s refits in favor of Tomahawk armored box launchers.  Hangar problems aside, the idea of fitting out major warships with ASW capability is highly suspect.  ASW is not the responsibility of a capital ship and no sane commander is going to risk such a ship playing tag with submarines.  In addition, the fact that the ship carried only a single helo meant that its ASW capability was not all that great to begin with.  Elimination of the helo/hangar was a good idea.  Interestingly, a proposal was made to install a vertical launch system for Tomahawks in the vacated hangar space, however, the idea was eventually dropped.


Armor.  The ships reportedly had 1 in (25 mm) Kevlar armor around the combat information center, magazines, and machinery spaces.  I don’t know the hull steel thickness and type.


Radar.  The ship’s main radars were the AN/SPS-48A 3-D air search radar and AN/SPS-40B 2-D air search radar which constituted a typical fit for the period.  These were mechanically steered, rotating units.  Given the maintenance and alignment problems with the Aegis SPY-x fixed planar arrays through the years, ComNavOps has often wondered if modernized versions of these units might not be combat-superior.  But, I digress …

Now, let’s do a bit of speculation, just for fun.

Nuclear Strike Group.  With the planned 11 ships of the class plus the two California class cruisers and the Truxtun, the Navy was on its way to assembling entire nuclear powered carrier strike groups.  This would have offered some significant operational and tactical advantages.  The group would have required no refueling support and could have operated at high speed for extended periods thereby allowing for rapid repositioning.  A highly mobile and self-sufficient task force would have been a significant benefit.


NTU.  The New Threat Upgrade would have made the Virginias quite formidable.  NTU, when it first came out, was superior to Aegis which would spend quite some time working out its bugs.  Of course, the Navy sank the entire Spruance class to avoid the Spruance-NTU fleet from threatening the Aegis funding.  A Virginia-NTU would have been the most capable AAW ship afloat.


One can only imagine the altered path of ship development if the Virginia-NTU and Spruance-NTU had come to pass.  It is likely that the compromised Ticonderoga class would never have come about and the Burkes might have, initially, been designed as stealth-NTU AAW ships to complement the Spruances instead of replace them.  This could have given us two focused ship classes: the ASW Spruances and the AAW Burkes instead of trying to make the Burkes a do-everything design.  The successor cruiser to the Virginias would probably have been a new design with more anti-surface capability than the Ticonderogas.


VLS Upgrade.  Had they continued to serve, the Virginias might have been upgraded to VLS at some point.  Given their size, it is likely they could have accommodated 128-160 VLS cells.  A truly powerful ship, indeed!


Aside from ComNavOps' personal affection for these ships, it is obvious that the Virginia class left a lot of untapped potential on the table when it was prematurely retired.  For all those naval observers and ship designers who constantly talk about extended ship service lives, this is yet another example of a prematurely retired ship class.  Premature retirement is the standard in the Navy, not the exception.  With this kind of history it is foolish to design for extended service lives.  As I’ve posted in the past, we should be designing for 15-20 year service lives because that’s all we typically get before we retire our ships.  All this planning for future growth is pure bilge droppings – it never happens!


The Virginias were wonderful ships and I wish they had been fully utilized by the Navy and had a longer service life for ComNavOps to enjoy and admire!

Posted by ComNavOps at 5:19 AM