ComNavOps has offered occasional book reviews and I’ll try to include a few more in the upcoming year.  ComNavOps loves books written by the men who were there.  There’s nothing like hearing it from the horse’s mouth.  Of course, that doesn’t guarantee that the horse is right but it’s a pretty good start.  One such book is “Hornets Over Kuwait” (1) which, as the title indicates, is about a Marine Hornet pilot in Desert Storm.  The pilot was, at the time, a 30 year old Marine Corps Captain flying with VMFA-451 (Warlords).  The book is written from the day to day perspective of the pilot rather than attempting to delve into the larger strategic or operational picture.  As such, we get a fantastic glimpse of the pilot’s limited but up close view of the war. 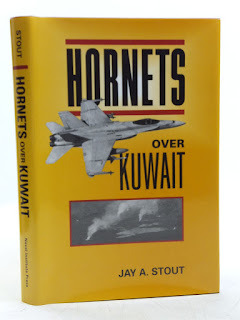 The book is as noteworthy for what it doesn’t describe as what it does.  What it doesn’t describe is peer-opposed air operations.  Instead, the book clearly conveys that Desert Storm was, essentially, a live fire exercise conducted in a leisurely manner, the more so after the first few days.  The author/pilot even acknowledges this in his preface and throughout the book.  Thus, the applicability of the author’s experience to a peer level war is quite limited.


The author has done a magnificent job of providing a head down, lower level perspective of a pilot in Desert Storm combat.  The gems and insights scattered throughout the book make for a completely absorbing tale that is every bit as entertaining as fiction but carries with it the fascination of reality.  I highly recommend it.