Let’s get technical, just for a change of pace.  Let’s take a bit of a look at the standard 5” gun of the U.S. Navy.  There have been 5” guns since before WWII but we’ll limit our examination to the modern versions, the Mk 42/45.

This is a bit of a follow on to a previous post on the 5" gun - see, "Mk45 Assessment" - and offers a slightly different perspective and a few issues for consideration.

The Mk 45 was first introduced in the California (CGN-36) class in the early 1970’s and has been the US Navy’s standard 5” gun since.  Interestingly, the Navy’s last two surface warships, the LCS and the Zumwalt, have abandoned the 5” gun.

Historically, the 5” gun has proven to provide a good balance of firepower and size/weight, enabling it to be installed on a wide range of ships.  The gun has proven quite effective in supporting amphibious landings such as Normandy and the Pacific island assaults.  Stories of WWII destroyers sailing right up to the beach and providing pinpoint fire support for assault infantry are common.

More recently, HMS Liverpool used its 4.5” gun against various Libyan ground targets in 2011, including against shore batteries firing on the British ship.  While the British 4.5” gun is not the 5” gun that is the subject of this post, it does illustrate the continued need for a naval gun of around that size.

Interestingly, all major navies seem to have settled on the 5” gun or a gun very close to that as their standard ‘heavy’ surface ship naval gun.

Here are some relevant characteristics for the Mk45 as reported by NavWeaps website (1). 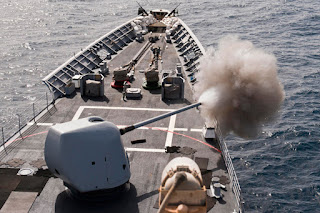 Note that the mount cover is just a weather covering and provides no protection from shrapnel.  Thus, the mount is susceptible to destruction/disabling from simple shrapnel or flying debris.  Contrast this to WWII 5” mounts which had 1”-2” of armor for protection against all but a direct hit.

The Mk 45 operating crew consists of a gun captain, a panel operator and four ammunition loaders with none located in the gun mount itself.

The 5” gun was considered an anti-air mainstay weapon in WWII but modern 5” guns, while claimed by manufacturers to be anti-air capable, are not generally considered effective in the role.

Let’s consider the history of the modern 5” Mk45.  Unfortunately, there is little combat use to evaluate but here are a couple of notable instances.

Praying Mantis – In April of 1988, the Navy used 5” guns to attack Iranian oil platforms (GOSP) with mixed success – the degree of success depending on who described the action and what they felt the objectives were.

“At the first muzzle flash from the Merrill's 5-inch mount 51, the Iranian 23-mm. gun mount opened up, getting the attention of the ship's bridge and topside watchstanders. The Merrill immediately silenced the Iranian gun with a direct hit, and encountered no further opposition. After about 50 rounds had exploded over the southern half of the GOSP, a large crowd of converted martyrs gathered at the northern end. At this point, we checked fire and permitted a tug to return and pick up what appeared to be the rest of the Sassan GOSP occupants. Following this exodus, the Merrill and the Lynde McCormick alternated firing airbursts over the entire GOSP …” (2)

Capt. Perkins reports that 208 rounds, total, were fired at Sassan and Sirri oil platforms.  Perkins noted that the structure of the platforms, with thin supporting legs, precluded effective naval gunfire and necessitated suppression followed by insertion of troops to destroy the platforms via demolitions.

Vincennes Incident – During the incident, the Vincennes attacked a group of possible Boghammer type speedboats but failed to record a hit despite around a hundred rounds being fired.  Initial reports indicated that two boats were sunk and a third damaged but later reports could not confirm any hits.  During the attacks, one of the 5” guns failed and the Vincennes had to maneuver to unmask the remaining gun.


Consideration of the 5” gun leads to several questions/issues:

Multiple Mounts – More guns are always better.  Guns always jam and fail – the Vincennes failure of one gun being a modern example.  If it’s worth having one gun on a ship, it’s probably worth having two or more for redundancy and reliability.  In combat, guns get damaged or destroyed and redundancy is critical.

Range – The 5” gun is the Navy’s only naval gunfire support weapon and its limited range requires close approach to shore in order to provide fire support which is at odds with the Navy’s stand-off doctrine and necessitates risking a multi-billion dollar Aegis ship.

Various extended range programs have been attempted in the past and have failed but one can’t help but wonder if a basic extended range munition/gun can’t be developed.  Previous efforts (ERGM, BTERM, and the like) have attempted to be near-magical and incorporate multi-mode guidance, advanced warhead performance, complex flight control systems, etc.  It would seem that a simple, extended range, unguided shell would be highly useful to support ground operations.  In other words, no electronics, no guidance, no advanced warhead, no flight control, no networking, none of the things that drive up costs and cause such programs to fail – just a dumb shell that travels further.

Armor – Current gun mounts are completely unprotected other than a weather cover.  As noted, WWII 5” mounts were protected by up to 2+” of armor.  Again, if a gun is worth having, it’s worth protecting it against near misses, shrapnel, and other easy kills.  This is all about keeping a ship combat-capable as long as possible in a fight.

Gunship – It might be worth considering developing a modern equivalent of the WWII Fletcher which mounted 5x 5” guns on a small hull.  With the addition of a navalized M-270 MLRS rocket launcher, one would have a compact, moderately powerful fire support vessel.

In summary, there is every reason to believe that a general purpose 5” gun is still a valuable addition to a modern warship although it should be installed in multiple, dual gun mounts to enhance its firepower and ensure its combat viability.  In addition, an extended range, unguided shell should be developed to extend the usefulness of the gun.

Note, that this is not to say that the 5" gun is the ideal naval gun.  ComNavOps is on record as preferring the 8" gun as indicated in the previous post.

Posted by ComNavOps at 2:08 PM