We’ve all heard the near-magical claims for the benefits of the electromagnetic aircraft launch system (EMALS).  Supposedly, it will allow a wider range of aircraft to be launched, increase aircraft life spans, and be more reliable and easier to maintain.  Are those claims true?

Reliability.  DOT&E has documented that the reliability is far below specification.  To be fair, EMALS is still in development and reliability ought to improve over time.  It’s a problem, now, because we’re installing it on operational carriers instead of developing it in the research world which is where it belongs.  The reliability will certainly improve but will it eventually reach the specification level?  That remains to be seen.

For the moment, the system is horribly unreliable and this claim is false.

Maintainability.  As far as maintainability, we’ve already found out that the individual catapults can’t be repaired while the others are operating.  They all have to be deactivated in order to work on any of them – a horrible characteristic of a combat system.  Worse, the time required to “spin down” the motors and spin back up is hours – again, a horrible characteristic for a combat system.  This aspect of the system is a designed in flaw and can never improve unless the entire system is redesigned.  Thus, it is clear that the maintainability is far worse than the legacy steam catapults.

This claim is patently false.

Here’s a few other data points of interest.

We see, then, that the weight launch range is at least from 12,000 lbs to 70,000+ lbs.  It’s highly unlikely that we’ll see another carrier aircraft heavier than the 70,000+ lb Skywarrior or smaller than the 12,000 lb A-4 Skyhawk.   The only aircraft I can think of that could conceivably operate from a carrier and be lighter than 12,000 lbs is something like the Super Tucano which has a combat loaded weight of around 11,000 lbs.  I suppose a very small UAV could operate from a carrier but does anyone really think the Navy is going to use a supercarrier to operate small UAVs? 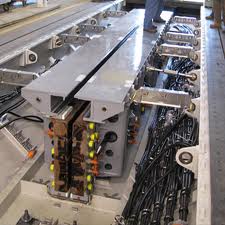 The claim of being able to launch a wider range of aircraft might be technically true, though that hasn’t been demonstrated, but appears to be operationally irrelevant in that steam catapults can already launch the entire range of aircraft we are likely to use.  Thus, the claim seems moot, at best.

In any practical sense, this claim is false.

Life Spans.  Supposedly, the smoother (another unproven claim) launch will impose less stress on the aircraft thereby increasing their life spans.  Currently, the launch stress appears to be greater, not less.  Launches have demonstrated that wing stress is so great that Hornets cannot launch with fuel tanks.

“The state-of-the-art catapult on the newest supercarrier is unable to launch jets loaded with external fuel tanks, …

The Electromagnetic Aircraft Launch System catapult puts too much force on external fuel tanks carried by legacy and Super Hornets, and EA-18Gs Growlers …” (1)

The Navy claims to have solved the problem with software modifications but final testing is not scheduled until sometime in 2019-20.  Until then, the problem is assumed to continue.

Further, an EMALS imposed nose bounce has caused safety concerns for pilots and prevented them from viewing instruments during the critical launch seconds.

“A Pentagon deficiency report in 2015 stated that extreme movements in the cockpit, possibly like the ones shown above, during launch risked pilot health.

"The oscillations shake the pilot's head sufficiently to impair their ability to consistently read flight critical data, which poses a safety of flight risk …" (2)

Moreover, carrier aircraft are retired based on factors such as wing fatigue due to g-forces during air combat maneuvers, corrosion in internal structural confines, cumulative maximum g-forces on the fuselage, etc.  None of these factors are related to the launch cycle.  Therefore, even if EMALS could, somehow, gently waft the aircraft aloft like a feather in a soft breeze, the aircraft would retire at exactly the same moment as they would if they were launched from steam catapults.

Thus, both the evidence and logic clearly disprove the claim of longer aircraft life spans.

This claim is false.

We see, then, that every claim about the EMALS catapult system is currently false.  Over time, and with more development, reliability may improve to the point that the claim becomes true, however, the claims about maintainability, range of aircraft launches, and increased aircraft life spans are simply not true and never will be.  They were marketing hype, at best, or lies, more accurately.

Posted by ComNavOps at 6:21 AM

Email ThisBlogThis!Share to TwitterShare to FacebookShare to Pinterest
Labels: EMALS