There’s an article on the USNI News website trumpeting the flexibility and capability of the Navy/Marine Amphibious Ready Group (ARG) and Marine Expeditionary Unit (MEU).  The article notes that the three ships of the ARG were widely distributed, as shown below.

Take a look at the map below and find those three locations.  That’s thousands of miles separation.  The Baltic Sea is some 3000 miles sailing distance from the center of the Mediterranean and the Persian Gulf is another 2500-3000 miles assuming the Suez Canal were available – not a sure thing in the event of a conflict.  So, depending on where the ARG/MEU needed to congregate, it would require one to two weeks or more of sailing to reform the MEU.  Consider that a disaggregated ARG ship that is, say, 3000 nm away from its needed location would require over 6 days sailing at 20 kts to reach the desired location. 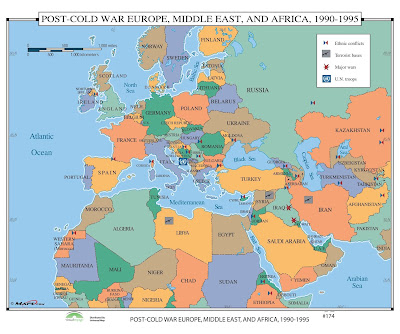 The point of a MEU is to present a credible, ready, on-site, amphibious force in high threat areas.  It is not to split off into operationally non-functional units and go on world tours.

One of the official MEU characteristics is

“Rapid response: within 6 hours of notification”. (1)

While simply waking up within six hours is, technically, responding, I’m quite sure that’s not what is meant.  I’m sure the six hour response is supposed to be to begin taking action.  Again, while beginning to set sail so that they can aggregate several days later is a response, it’s a pretty ineffectual response.  Thus, disaggregation negates one of the central characteristics of the MEU.

“An ARG/MEU is best employed as designed—as a single entity.” (1)

An ARG/MEU spread over several thousand miles and with a continent’s separation is not a single entity nor can it aggregate in any useful time frame.

Further, the MEU is considered the smallest Marine unit capable of independent operations but only as a complete unit.  Disaggregation eliminates the MEU as a combat capable unit.

The big problem with this policy of disaggregation is that in a time of crisis the temptation will be to commit the disaggregated MEU piecemeal instead of waiting several days for the group to assemble its full combat power.  A third of a MEU is of little use and would likely become a liability.

“Although ARG/MEUs are highly capable and flexible organizations, there are some limitations on key enablers that constrain tactics and employment options if required to operate in a split or disaggregated manner.” (1) [emphasis added]

What this is really saying is that a disaggregated MEU can’t perform any task more stressing than taking on a rogue Boy Scout troop.

So what was accomplished, in this case, by breaking up the ARG/MEU to the point of ineffectiveness?  Well, one third of the MEU got to practice amphibious operations with the Romanians.(2)  Seriously, does anyone believe we’ll ever conduct an amphibious assault with ?  And, even if we did, what are the odds that the handful of personnel that participated in the exercise with would be around to conduct the assault?  The Romanians used rubber boats, for crying out loud!  That’s not how we do assaults so why are we practicing for that?  What a waste of time and resources!

The Marines seem to recognize the dangers and limitations inherent in disaggregated operations and yet persist in doing so.  Why?  The benefits are miniscule, at best.

We run the risk of committing MEU fractions piecemeal – a recipe for disaster.

Finally, I have to ask, if we’re going to disaggregate the ARG/MEUs, then why have them?  If it takes a week or two to consolidate before they can take action, can’t we just leave them home and ship them out when needed?  The time frame would be the same.

Further, if it takes a week or two to bring an ARG/MEU to bear, why don’t we just use Army/Air Force units which can deploy anywhere in the world in less time.

Honestly, disaggregated MEUs are a great argument for disbanding the Marine Corps.  Marine leadership appears not to recognize this.

Marine Corps leadership needs to get their heads out of their butts, drop this disaggregation nonsense, and start preparing and training for their real job which, in my opinion, should be port seizure.