ComNavOps has noted that the Navy’s LCS gun defense against small craft in the swarm scenario is ineffective.  It appears that the Navy has also recognized this because they deleted the LCS’ Mk110 57 mm gun from the Zumwalt class in favor of a smaller 30 mm gun which they claimed was more effective and more lethal.  Further proof of the gun’s ineffectiveness can be seen in early gun test videos intended to promote the gun but which actually show its ineffectiveness.

The main problem with the gun is the lightweight, airburst munition for the gun.  The round generates a lot of shrapnel which can kill unprotected crew but has little actual stopping power on a boat.  If a small craft is not stopped, the ship/gun cannot shift fire to the next target and while the ship/gun try to pound the target into stopping, all the remaining swarm boats continue their approach.  To be fair, guns, in general, are ineffective in such a scenario.  What is needed is a one-shot, one-kill weapon like a small, guided, fire-and-forget missile.

BAE Systems seems to have recognized the shortcoming of the Mk110 57 mm gun and has developed a new munition intended, specifically, for the small boat, anti-swarm scenario.  The new munition is the ORKA (Ordnance for Rapid Kill of Attack Craft) Mk295 Mod 1 57 mm guided projectile.

The projectile has a semi-active imaging seeker that can be laser guided or can seek its target autonomously by downloading an image of the target prior to firing (1).  The data sheet suggests that the target image is cued from a designating laser (2).  Guidance motive capability is accomplished via a system of four folding canards.

The round contains a bit over 200 g of PBX high explosive that delivers 1.4 kg of steel fragments (2).  Fuzing modes are timed, proximity, or point detonation (1, 2). 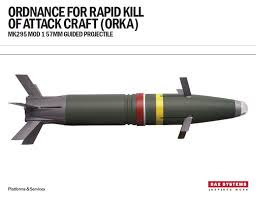 BAE Systems claims that the projectile will accomplish a one-shot, one-kill efficiency.  Note, however, that the burst mode is still the original weakness.  Presumably, the claimed increase in lethality is attributed to the guided nature of the round with the hope being that the round will burst in closer proximity to the target and thus prove more lethal.  Alternatively, the point detonation fuze mode might provide disabling hits but I don’t think the odds of hitting a small, high speed, maneuvering target are very great, even with a degree of guidance/seeking.

Without seeing a demonstration or some other proof, I conclude that the new, guided projectile will have only a marginally better performance and will still be totally ineffective in the anti-swarm scenario.  Still it’s small step in the right direction, I suppose.

Posted by ComNavOps at 8:37 AM