The Navy is on a seemingly endless path of Burkes, Burkes, and more Burkes.  Yes, they’ve upgraded the design but they’re bumping up against inherent limits in internal volume, power, cooling, utilities, weight margins, etc.  The Burkes are unable to properly support the new Air and Missile Defense Radar (AMDR) system and so we’re going to build Flt III Burkes with sub-optimally sized radars that, by the Navy’s own admission, won’t meet the desired performance.  That’s idiotic to build a brand new ship with initial sub-optimal performance and no growth margin!

We’re also bumping up against cost.  How many multi-billion dollar ships can we afford?  The fleet is steadily shrinking as we continue to build ever more expensive ships in ever fewer numbers.  The Flt III Burke is likely to be 50%-100% more expensive than the Flt IIa.

That aside, how many Burkes do we need?  Well, we have 62 Burkes currently built with up to 76 planned and no end in sight.  Let’s look at our needs and see if we can figure out how many Burkes we actually need. 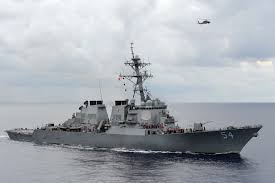 Given that Burkes are intended as escorts, primarily, we can roughly calculate how many we need.  In war, let’s assume we would have six Burkes per carrier (twice what we use during peacetime).  We have a maximum of 9 active carriers so that would be a requirement for 54 Burkes.  However, even during war we would only have 3-6 carriers out on operations at a time.  That equates to a steady need for 18-36 Burkes.  Of course, some Burkes would be unavailable due to refits at any given moment so we would need a few more (the peacetime model of three ships to keep one deployed would be abandoned in war).  This suggests that we already have more Burkes than we need.  Let’s generously round the numbers up and say we have a need for 50 escort Burkes.  Compare that to the 62 built and 76+ planned and you immediately see that we don’t need any more Burkes!

Surely, though, we need more ships than a handful of carriers and 50 Burkes?!

Yes, we do – but they don’t have to be Burkes and should not be Burkes.  Okay, if not Burkes, what then?

MCM – We have a desperate need for Avenger-type MCM vessels and MCM motherships.

Strike – We have a need for a dozen cruise missile (and short/med range ballistic missile) shooters.  These can be submarines (recall that we’re retiring the

SSGNs with no replacement) or surface ships.

Fire Support – We need a dozen or so naval fire support ship to support amphibious assault operations and general land actions.  These ships can be some combination of large caliber naval guns and navalized Army rocket systems (MLRS/ATACMS).

UAV Carrier – We need a dozen small, dedicated UAV carriers to operate hundreds of UAVs in the surveillance role.

Carriers – These are our most powerful and flexible platforms and we need to get the numbers back up to around 15.

Patrol – We have a need for a large patrol vessel to maintain control of littoral areas, mainly the .  These should be upsized and uparmed versions of the Cyclone PC’s.  These would be what the ASuW-LCS should have been.  They would be heavily armed for their size.

Logistics – We desperately need many more replenishment and supply vessels, especially if we’re going to operate in the Pacific.

Submarines – We already have a looming shortfall of subs and they are probably our stealthiest, most effective naval platform.  We need many more.

Not only do we not need more Burkes but the basic seaframe is a 1980’s era design.  It’s time to terminate the Burkes and design a new destroyer and cruiser utilizing the latest propulsion, armor, stealth, internal networks, electrical generation, etc.

The Navy has failed so badly at new ship designs that I completely understand their desire to stick with something that works but the answer is not to stick with an old design but to improve how you build new ones.

We need to stop building Burkes.
Posted by ComNavOps at 5:00 AM