Many of the Navy’s current assets seem to make no sense for the threats we face.  They have insufficient range, limited firepower, no armor, are sub-optimal for their roles, etc.  How did these assets come to be and why are they so mismatched for their intended purpose?  It’s almost as if they were built to fight a different war than the one(s) we’re headed for.  Well, that observation is pretty much true.  Let’s dig into history and see how this all came to be.

The origin of today’s mismatched assets lies in the defense department’s transformation movement of the 1990’s and 2000’s.  As a reminder, here’s one definition of transformation.

“Defense transformation has been defined in several ways. For this report, it can be defined as large-scale, discontinuous, and possibly disruptive changes in military weapons, organization, and concepts of operations (i.e., approaches to warfighting), that are prompted by significant changes in technology or the emergence of new and different international security challenges. In contrast to incremental or evolutionary military change brought about by normal modernization efforts, defense transformation is more likely to feature discontinuous or disruptive forms of change.” (1)

This definition is worrisome in that it ignores thousands of years of technological development history – a history that assures us with almost absolute certainty that transformational leaps in technology never succeed.  Thus, the leaders of the time should have paused and reassessed their approach – but they didn’t.

“The Bush Administration has identified transformation as a major goal for the Department of Defense, and has stated that defense programs will be assessed in terms of their potential for contributing to defense transformation.” (1)

For a time, the Navy’s guiding document was “SeaPower 21” which envisioned combat power built around the elements of Sea Strike, Sea Shield, and Sea Basing, all tied together through the overarching ForceNet network computer system.  We see, in this, the hints of the failure to come – the belief that we would have an inherently secure, unchallenged environment from which to launch leisurely strikes, conduct basing operations as we pleased, and operate a massive, almost magical network unhindered by any enemy electronic countermeasures or cyber warfare.

CRS summarizes the features of transformation in the following table (1). 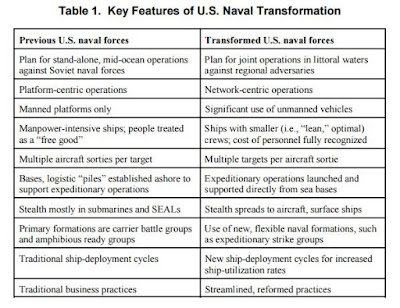 This table makes clear all that we need to know to understand the origins of today’s mismatched assets.  Compare the two columns and note the underpinning assumptions of each.  In particular, the “transformed” column has a clear, base assumption.  Let’s look, briefy, at each transformation feature from the table and see what the underlying assumption is and see if we can identify a common theme.

Joint Ops in Littoral Waters, Regional Adversaries – This assumes that we will not a fight an enemy that can reach out and touch us at long range or deny us the freedom to operate near shore, as we wish.

Unmanned Vehicles – Unmanned vehicles are a significant step down on the lethality and survivability scales so this feature assumes that we will not fight an enemy with any ability to attack our unmanned vehicles.  That’s a really low level of conflict!

Multiple Targets Per Sortie – This assumes that we will have the freedom to conduct leisurely recon and target location, unhindered by any enemy interference.  This also assumes that our aircraft will be able to loiter in enemy airspace and make multiple attack runs or casually move from one target location to another.  In short, this assumes the total absence of enemy aerial resistance or even ground based AAW.

Expeditionary Operations – This assumes that we will be able to move supplies via air without hindrance.

Stealth – Nothing wrong with this!

New Naval Formations – This assumes that we no longer need concentrated combat power and that we can disaggregate our ships.  This assumes the complete absence of any effective naval engagement by the enemy.

Ship Deployment Cycles – This is the beginning of the self-destructive fantasy of minimal manning, deferred maintenance, and systemic neglect.

Business Practices – This assumes the absence of a peer or near-peer enemy with the corresponding assumption that we can run the Navy like a business instead of a like a combat organization.

Do you see the common theme – the underlying assumption?  Of course you do.  It’s painfully obvious.  The people who came up with “transformation” assumed that we would not have to fight an enemy capable of fighting back.

Consider that assumption carefully.  It meant that we would now design a military that was not intended to fight – only to deliver ordnance in an uncontested environment.

Consider the policies, ships, aircraft, and tactics that arose from transformation.  At their heart, each reflects the design assumption that they will not have to fight – only deliver ordnance in a leisurely manner in an uncontested environment.

The F-18 doesn’t need range because we can get as close to the target as we want before we launch aircraft.

The F-18 doesn’t need to be a great fighter because there won’t be anyone to fight.

The Burke doesn’t need armor because no one will shoot at it.

We don’t need mine countermeasure ships because no one will contest our mastery of the sea.

We don’t need a long range, supersonic, anti-ship missile because there is no enemy with ships capable of defending themselves.

We don’t need a 90+ aircraft air wing because there is no enemy that can challenge even our smaller 60+ air wings.

The LCS doesn’t need AAW capability because no one can challenge our mastery of the air.

The giant electric motors of the EMALS catapult don’t need to be electromagnetically shielded because no one will come looking for it.

We’re left with a force that was never designed for combat and now, faced with peer or near-peer combat, we’re realizing that our ships, aircraft, weapons, and tactics are mismatched for what we need them to do.  It’s not their fault.  They were never intended for combat.

Ultimately, it wasn’t the attempt at transformation itself that produced today’s failures – it was the strategic mindset that went along with transformation that led to today’s mismatched assets.  The belief that we would fight ill-equipped, weak, third world militaries rather than peers or near-peers led to the creation of assets that were not optimized, not powerful, not long ranged, etc.  Indeed, why would they need to be if you believe that no enemy can challenge your mastery of the sea and air?  Unchallenged, you can get that short ranged aircraft as close to the enemy as needed.  Unchallenged, you can get that sea base up to the enemy’s shore.  Now, however, that misguided thinking has come home to roost.

Let’s take one final look at the mindset of the people who birthed transformation.  From their perspective, at that time, there were no peer/near-peer competitors so they acted in a completely understandable and logical manner and formulated a completely understandable and logical transformational strategy, didn’t they?  That circumstances changed is hardly their fault. is it?  They could not have foreseen the rebirth of an aggressive and militantly/militarily expansionist and coupled with a nuclear armed and terrorist-supporting , could they?  At that time, no one could have anticipated any of that, right?

While I might forgive the lack of specific prescient predictions, history guarantees with 100% certainty that a new and hostile peer will always arise.  The failure to heed history’s lesson is what is truly unforgivable.

Posted by ComNavOps at 5:00 AM