By now, you’ve read about the two tankers, one Norwegian and one Japanese, supposedly attacked by Iranian forces in the Gulf of Oman on 13-Jun-2019.  The US believes the Iranians were responsible.  Publicly released evidence is sketchy but includes,


On a related note, the crew of the Japanese ship reported being attacked by a flying object but there has been no other such reports or verification. (2) 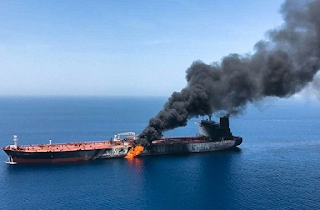 Also on a related note, you might recall that a month ago four oil tankers were damaged in an attack off the coast of the United Arab Emirates using what were likely limpet mines. (2)


The US appears satisfied with whatever evidence it has and is blaming the Iranians for the attacks.


"It is the assessment of the U.S. government that Iran is responsible for today's attacks in the Gulf of Oman," Secretary of State Mike Pompeo said. "These attacks are a threat to international peace and security, a blatant assault on the freedom of navigation, and an unacceptable escalation of tension by Iran." (1)


As I said, the publicly released evidence is sketchy although the video of the Iranian boat removing the limpet mine is fairly damning.  One would assume that the US has additional evidence that it prefers not to release so as to protect sources although that’s just speculation on my part.


Let’s set aside the question of absolute proof or not and, instead, examine the larger issue of maritime security and the US Navy’s role.


By their own claim, the US Navy’s mission is to ensure the freedom of the maritime global commons.  From the Navy website,


The mission of the Navy is to maintain, train and equip combat-ready Naval forces capable of winning wars, deterring aggression and maintaining freedom of the seas. (3)


So, the Navy exists not just to protect US-flagged shipping but to deter aggression, apparently from any source and directed anywhere and at anyone and to maintain the ‘freedom of the seas’ which, again, suggests that the Navy is defending the maritime commons for ALL nations.  Thus, an attack on any country’s ship constitutes aggression, which is the Navy’s self-proclaimed mission to prevent, and a threat to the general freedom of the seas which, again, is the Navy’s job to prevent.  This then eliminates the idea that since the attacked ships weren’t US-flagged, the Navy can’t get involved.


We have, then, ample justification for naval action with the only question being, against whom?  Since we just read that the US Secretary of State is unequivocally assigning the blame to Iran, it follows that the Navy is duty bound to take action against Iran.


We have seen a pattern of inaction in response to provocations, aggression, and threats.  For example, the Iranians illegally seized our boats and crews when they were lost, the Chinese have made outrageous territorial claims and attributed non-existent attributes to EEZ zones, the Russians have conducted multiple unsafe aerial and naval acts around our forces, the Chinese have ordered us out of ‘their’ South China Sea (ignoring the fact that it is international waters!), the Chinese have seized our unmanned underwater vehicles, the Iranians have interfered with our carrier aviation operations, and the list goes on and on – a buffet of aggression and threats to the freedom of the seas.  The only recent exception to this pattern of inaction on our part was the launching of some Tomahawks at purported radar sites in Yemen in response to a claimed attack on a Burke destroyer – an attack that public evidence strongly suggests never occurred.


So, I repeat, why are we wasting time, effort, and resources maintaining a forward presence when we clearly have no intention of using them?  Now, perhaps I’ll be surprised and wake up tomorrow to read about a retaliatory attack on Iran but I suspect not.  If we’re not going to use the Navy then bring the ships and crews home and let’s save unimaginable amounts of money.


The video of the Iranians removing the mine from the ship was taken by a US drone.  What better opportunity and justification could there be for action?  Instead, we did nothing.  The fleet is useless.  It’s accomplishing nothing.  Bring it home.


(1)Business Insider website, “An Iranian boat reportedly fired a missile at a US drone right before the tanker attack”, Ryan Pickrell, 15-Jun-2019,
https://www.businessinsider.com/iranian-boat-took-shot-at-us-drone-before-tanker-attack-2019-6