Observers are looking with excitement and anticipation at the development and eventual inclusion of an Infrared Search and Track (IRST) sensor into the F/A-18E/F Super Hornet.  This will be a significant advance for the Hornet and broaden the aircraft’s capabilities.

The Boeing/Lockheed Block II IRST, under development in an $89M contract, will be housed in the nose section of an external centerline fuel tank.  Development is scheduled to be completed in 2020. (1)

"IRST is yet another addition to the Super Hornet Block II arsenal, and it will truly change the nature of the air-to-air fight," said Capt. Donald "BD" Gaddis, Navy F/A-18E/F and EA-18G program manager, PMA-265.” (2)

This revolutionary, first of a kind capability will …huh? … what?  …  Hold on a minute.  Someone is interrupting me.  What?  It what?  Back then?

Uh, I’ve just been informed that this state of the art IR sensor may not be quite as revolutionary as I thought, having been lead to believe, by the Navy, that nothing like this has been achieved before.  Apparently, I’m told, the F-14 Tomcat had this sensor capability, and more, decades ago.  Okay, let’s take a look back and see what the ancient, outdated, hopelessly outclassed Tomcat had in the way of sensors.

The Tomcat’s non-radar sensors were mounted in distinctive chinpods under the nose.

ALQ-100 E/F/G/H-Band Track-Breaker – The early F-14A had the ALQ-100 mounted under the nose.  While not a sensor, the electronic countermeasure device was a prominent chin-mount and I mention it for clarity.

ALR-23 IR Seeker - The early F-14A had an IR seeker in a chinpod mount.  The seeker could be slaved to the radar or used independently and was gimbal mounted and could be steered.  I’ve been unable to find much additional information about the sensor’s capabilities or how it was used tactically. 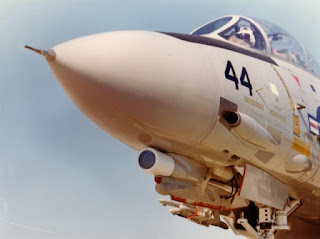 AXX-1 Television Camera System (TCS) – The Northrop TCS was an optical sensor consisting of a telescopic television imager and cockpit display and provided telescopic images of targets far beyond unaided visual range.  Identification ranges are stated to be 10 miles for small fighters and out to 85 miles for large bombers and cargo planes. (4)   The TCS had a 30 degree conical field of view and could be slewed at a rate of 30 degrees/second and was gyroscopically stabilized in pitch/yaw at up to 150 degrees/second.  Thus, the TCS was unaffected by the aircraft’s maneuvering within the field of view.  The TCS also had a tracking-lock capability to enable the target to be continuously followed.  Automatic scan-lock was another built in feature which allowed automatic target detection during continuous scanning.  The Tomcat’s AWG-9/71 radar could be slaved to the TCS or vice versa.  The TCS was first fitted to the late model F-14A.  Additional information is available in a summary report (5).

AAS-42 IRST – A more advanced IR sensor, the AAS-42 appeared on the F-14D in 1990.  The sensor provided search and track capability as well as IR imagery.  From Deagel website,

F-14D’s often utilized a potent side by side, dual combination of IRST and TCS which may have had detection ranges as much as 110+ miles, thereby greatly enhancing air-to-air targeting and useful missile launch ranges. (6)

While the Navy is loudly and proudly proclaiming the coming use of IRST on the F-18 Hornet, we see that the reality is that effective IR and optical sensors existed on the F-14 Tomcat long ago.  Why the Navy abandoned these sensors when the Hornet was developed is baffling.  Today, as we look at the F-35 and all its problems and costs, we view the Hornet fondly and think of it as a good, if not great, aircraft.  The reality is that the Hornet was a very compromised and, as regards combat effectiveness and range, a very ineffective aircraft.  The addition of IRST is a welcome development but, good grief, we had that and better in the F-14 many decades ago.  Even with the IRST, the Hornet will still lack the F-14’s highly effective TCS.

The eyes of the Tomcat were highly effective combat enhancers that the Navy is only now, and only partially, matching with the Hornet’s cobbled together IRST/fuel tank conglomeration.

As the Soviet pilots of the era knew well, the eyes of the Tomcat were always on them.  We need to remember the capabilities we had decades ago and begin designing actual combat aircraft again that can at least match what we once had.  What passes for a combat aircraft today is a sad reflection of what once was.

Note:  I’m well aware that other aircraft in the ‘60’s and ‘70’s also had similar sensors – no need to list them in a comment.  Again, it just shows how far we’ve drifted away from actual combat aircraft design.