You’ve all read about the recent collision between the 505 ft long, 9000 t, Burke class destroyer, the USS Fitzgerald, and the 730 ft long, 40,000 dwt, Philippine-flagged container ship ACX Crystal.  I’ve had no comment, thus far, because there has been insufficient factual information to comment about.  There was no information on the circumstances of the collision, the exact extent of damage, or even the specific damage control measures beyond general statements about some flooding.

Now, however, some snippets of information are becoming available.

“USS Fitzgerald suffered damage on her starboard side above and below the waterline. The collision resulted in some flooding.” (1)

“… Fitzgerald is under her own power, although her propulsion is limited.” (1)

“… Fitzgerald suffered an enormous gash in its hull under the waterline, causing both berthing compartments and the auxiliary machine room to flood rapidly …” (2)

However, one of the pieces of information that I’ve been waiting for has become available and I’ll offer an analysis.  That information is pictures of the damage to the ACX Crystal.

Look at the Fitzgerald and note the degree of visible damage.  From the comments and visible damage, it is clear that the ship was very badly damaged and was in danger of sinking. 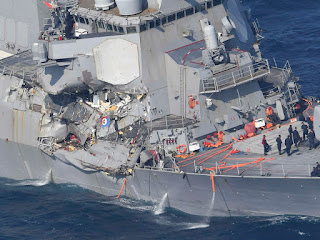 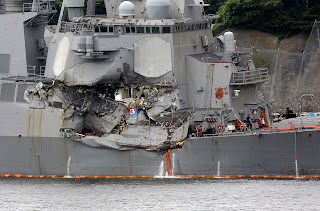 Now, look at the ACX Crystal.  The only visible damage is the bent bulwarks above the deck line and a possible small tear in the ship’s plating at the bow. 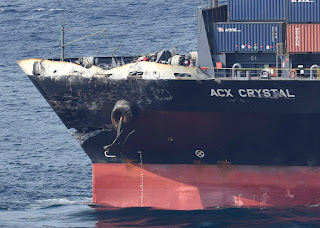 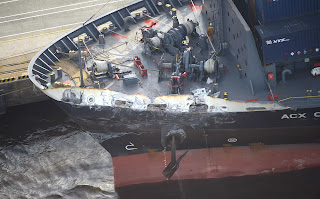 How do you reconcile the extremes of the visible damage?  That the larger ACX Crystal would inflict more damage on the smaller ship is to be expected but that the would show almost no hull plating damage at the point of impact speaks volumes about the relative thickness and strength of the two ships construction, framing, and hull plating.  The Fitzgerald’s hull plating crumbled like tissue paper while the ’s was barely dented other than the thin bulwarks above the main deck.  In other words, the container ship was, apparently, built like you’d expect a warship to be built and the warship was built …  well …  weakly.

Let’s be fair and acknowledge that we have no description of the ’s damage other than what can be seen in the photos.  It could be that the ship suffered serious damage and flooding below the waterline but there is absolutely no indication that that is the case.

The Navy needs to seriously rethink its warship design philosophy and construction practices and standards.  From a construction perspective, this is embarrassing and ominous.  What will happen when missiles and torpedoes start impacting our ships in combat?  All historical evidence suggests that our ships will prove to be extremely fragile.