Many people believe that torpedoes are the biggest threat to surface ships due to their combination of stealth delivery, large warheads, subsurface detonation effects, and the virtual absence of any effective defense.  Tough to argue with that although mines are equally devastating and ballistic missiles, if they hit, would be potent.

So, if torpedoes are such a threat, we must have put a great deal of research and development into anti-torpedo defense (ATD) over the years and we must, by now, have some pretty robust defensive measures in place, right?  Look at the massive effort that has gone into AAW/SAM efforts against cruise and ballistic missiles.  Surely, we must have been equally active and successful in our ATD efforts.  Well, let’s look at the Navy’s current state of the art in ATD.

There are two broad categories of defense, hard kill and soft kill.

In the early 2000’s, the Navy attempted to develop a hard kill system which used a small, agile torpedo to intercept and kill an incoming torpedo.  From the Navy website comes this description of the Anti-Torpedo Torpedo (ATT) system (1).

“The Navy and ’s Applied Research Laboratory are also developing an Anti-Torpedo Torpedo (ATT) that could be launched from both submarines and surface ships to intercept and destroy inbound threats. … As currently configured, the 200-pound ATT is 6.75 inches in diameter, 105 inches long, and powered by a stored chemical-energy propulsion system similar to the Navy’s MK 50 torpedo. Advances in electronics miniaturization, significant increases in microprocessor computation rates, and sophisticated processing algorithms have overcome the shortcomings of the previous ATT program, which was cancelled in 1994. A capability to launch multiple ATTs simultaneously to defeat multiple, salvo-fired torpedoes is a required feature. Tests of the ATT have been planned for late 2006.”

The ATT system has apparently now morphed into the Surface Ship Torpedo Defense (SSTD) system with tests having been conducted in June of 2013.  The basic components remain unchanged and include the Nixie towed decoy and detection system, now called the Torpedo Warning System (TWS), and the anti-torpedo torpedo now being called a Counter Anti-Torpedo (CAT).  Additional testing is planned and initial operational capability is planned for 2019 with full fleet-wide adoption by 2035.  According to DOT&E, testing has, thus far, been conducted under fairly benign and unrealistic conditions (2).  Exercises were conducted at much deeper depths than the expected threat torpedoes would operate and the TWS and CAT were not, therefore, tested at the expected operational depth which would include significant surface water effects.

The CAT is an all-up round housed in a canister and ready for launch.  The round is designed for high speed and maneuverability and uses a stored chemical energy propulsion system.  The CAT safety/arming system has, apparently, encountered an unspecified major anomaly that the Navy is still working to overcome.

Note that the development path has been convoluted and has intermixed with efforts, as well.  Some of the designations and incarnations are debatable but, for our purposes, the basic technology is correct. 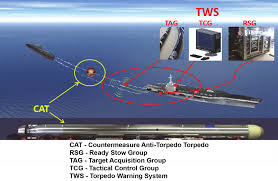 Nixie.  The Nixie SLQ-25 torpedo decoy is a towed device that emits acoustic signals intended to decoy and pre-maturely detonate torpedoes.  The device has been in use for decades and more recent versions incorporate add-on torpedo detection sensing devices and enhanced signal generators.  The latest version incorporates active sonar sensing.  Defense Industry Daily website reported a 2005 contract for 3 SLQ-25 sets for around $7M each.  A more recent order for 5 SLQ-25C systems was placed for a little over $1M each.  It is not clear whether that was for complete systems or just the decoy emitter, itself.

Of course, the Russian Type 53-65 torpedoes are wake homing and are not susceptible to acoustic decoys like Nixie.  Further, wire guided torpedoes are far less susceptible to decoys as the base submarine is able to use its more extensive and capable targeting capability.

A roughly equivalent system apparently exists in the Royal Navy as S2170 and is also known as Sea Sentor.

The old Mk 57 Mobile Submarine Simulator (MOSS) was a 10 inch diameter, mobile decoy that was launched from a torpedo tube.  MOSS has since been replaced by the six inch EX-10 Mobile Multi-function Device (MMD), which can be fired from a countermeasures tube.

LCS Multi Function Towed Array (MFTA).  The SQR-20 (now TB-37U) MFTA is a long 3″ diameter towed array for surface ships.  It has both active and passive sonar capabilities and is claimed to have improved better coverage, detection capability, and reliability than the SQR-19 TACTAS and includes a torpedo detection capability.  This is not actually an anti-torpedo system since it is not currently coupled to any defense mechanism.  It is a detection system, only.

A May 2015 contract for seven MFTAs was issued at around $4M per system.

A Light Weight Tow (LWT) Torpedo Decoy for LCS functions similar to a Nixie.  There have been claims that it is effective against wake-homing torpedoes although I have been unable to authoritatively confirm this and the mechanism for such a capability escapes me.

So there you have it.  That’s about the state of the art in ATD.  Not very impressive for all the years that we’ve had to work on it and the enormous destructive potential of the torpedo threat.  As with mines, the Navy seems to have largely ignored the threat in favor of building shiny new ships.

So, what could be done in the way of future ATD?  Here’s some ideas, unbounded by physics or reality.  Honestly, the liquid phase (water) physics are poorly understood by most of us so some of these ideas may be completely unfeasible.  Still, they’re worth a bit of thought!

As I said, some of these ideas will probably not be viable but they're worthwhile starting points for development of new anti-torpedo technologies.

Given the seriousness of the threat, the Navy needs to be equally serious about countermeasures.  It's baffling that ATD has been ignored the way it has.  We need to quit obsessing over new ships and start protecting the ones we have.